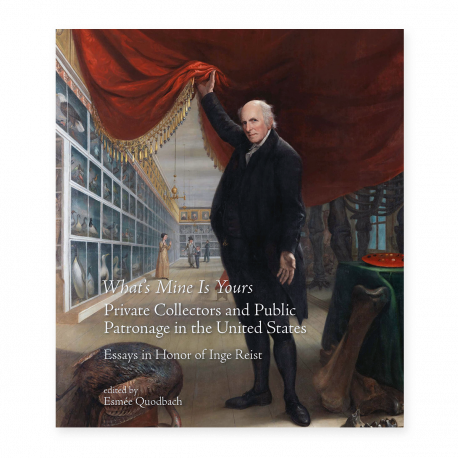 WHAT'S MINE IS YOURS

Private Collectors and Public Patronage in the United States

This publication is devoted to private collectors and their relationships with and gifts to public institutions in the United States. Thirteen authors bring to life the long tradition of private collecting and public philanthropy in America and reveal new insights into the formation of many of its major art institutions.

Public-spirited collectors such as Henry Clay Frick, Andrew Mellon, and Solomon and Irene Guggenheim fulfilled their desires by establishing The Frick Collection, the National Gallery of Art, and the Guggenheim Museum, respectively. John G. Johnson’s collection was first left to Philadelphia as a standalone museum, and later fell under the stewardship of the Philadelphia Museum of Art. Eleanor and Edsel Ford were instrumental supporters and contributors to the Detroit Institute of Arts. Samuel Putnam Avery was a civic-minded art dealer, adviser, and collector whose porcelain collection helped shape the Department of Asian Art at The Metropolitan Museum of Art in New York. Some collectors, including Catharine Lorillard Wolfe, Michael Friedsam, Adelaide de Groot, and Martin A. Ryerson, made significant gifts to pre-existing museums such as The Met and the Art Institute of Chicago. Finally, Robert Gilmor, Jr., and arguably Mary Jane Morgan, had aspirations of building public collections, yet they were not successful for various reasons. “What’s Mine is Yours” celebrates Inge Reist, founding Director and now Director Emerita of the Center for the History of Collecting at the Frick Art Reference Library.

WHAT'S MINE IS YOURS