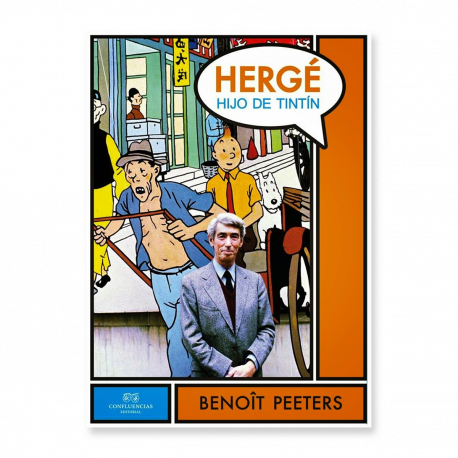 The study of the works of comic creator Hergé and the cultural impact of Tintin, his best-known and most influential character.

The adventures of Tintin and his dog, Snowy, have captivated people worldwide since they first appeared as an insert in the Belgian Catholic newspaper Le Vintième Siècle in 1929. Available for the first time in English, this insightful biography delves deep into the psyche of Tintin creator Georges Remi and his public persona Hergé.

Author of the critically acclaimed Tintin and the World of Hergé and the last person to interview Remi, Benoît Peeters tells the complete story behind Hergé’s origins and shows how and why the nom de plume grew into a larger-than-Remi personality as Tintin’s popularity exploded. Drawing on interviews and using recently uncovered primary sources for the first time, Peeters reveals Remi as a neurotic man who sought to escape the troubles of his past by allowing Hergé’s identity to subsume his own. As Tintin adventured, Hergé lived out a romanticized version of life for Remi.

Millions have traveled alongside Tintin and Snowy through books, animated television series, theatrical performances, exhibitions, documentaries, and movies, including Steven Spielberg’s fall 2011 The Adventures of Tintin. Now Tintinologists have the opportunity to better understand the complex and sometimes dark personality of Tintin’s creator and his carefully crafted public persona.